Including Navajo, Zuni, Hopi, and other native crafts...
Where All Your Purchases Help the "Poorest of the Poor"

The monument being placed here at the Gallup Cultural Center, which is housed in the old Santa Fe Depot, is has great historical significance. As one Navajo Code Talker remarked during the unveiling of the statue, "this is the perfect setting for this work of art - in 1943 I caught a train from this building to San Diego to become a Code Talker, little did I think 60 years later there would be a statue honoring those Marines I served with."

The monument was the first step to achieving the dream of building a world class exhibit dedicated to telling the story of these brave men and honoring their contribution to both the Navajo Culture and American history as well. 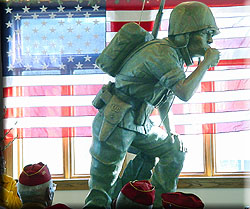 This work honoring the Navajo Code Talkers of WWII by noted Navajo sculptor Oreland Joe takes a commanding position in The Gallup Cultural Center's Gallery of the Masters.

Directly in front of the Cultural Center building stands the regal statue of Chief Manuelito. This sandstone sculpture done by sculptor Tim Washburn was done as part of a community arts initiative. Southwest Indian Foundation jumped at the chance to help the local governments get the project off the ground (literally, we paid for the pedestal that the statue sits on) and we are very proud to be able to have the piece here on the premises.

In addition to the "Art of the Masters", the Gallup Cultural Center is proud to display various other pierces of Native American art that we have acquired over the years. Some of which include pottery by Lawrence Namoki, a famous Hopi potter, and a history of the Dine mural on a buffalo hide by Walter Begay and a basket by Lorraine Black inspired by the 2002 olympics.

Children's art on display during the Months of November December and January each winter.

Award ceremony is held on the first Friday in December each year. 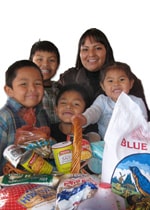